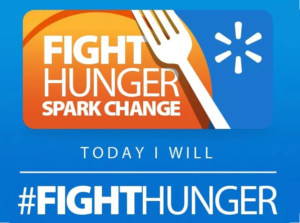 One in seven northwest Pennsylvanians faces hunger, according to Feeding America’s Map the Meal Gap study, including nearly 30,000 children under the age of 18. To raise awareness and combat the issue, Walmart, Sam’s Club, Feeding America® and Second Harvest Food Bank of Northwest Pennsylvania are kicking off the sixth annual nationwide “Fight Hunger. Spark Change.” (FHSC) campaign, which will run from April 22 to May 20.

In partnership with Second Harvest, Walmart and Sam’s Club now invite shoppers across northwest Pennsylvania to help fight hunger in their local communities. There are three ways to participate – purchasing a participating item in-store or online, donating in-store or donating on Feeding America’s website.

With 749 million meals donated nation-wise over the last five years, northwest Pennsylvania customers and members can help the Feeding America network secure its 1 billion cumulative meals goal in three ways. They can track the number of meals by visiting www.walmart.com/fighthunger.

“By working with Walmart, its 18 supplier partners and Synchrony Bank, we have an amazing opportunity to make progress towards fighting hunger in our community,” said Karen Seggi, Executive Director of the Second Harvest Food Bank. “This campaign will help increase awareness about the issue of hunger in America, allowing us to secure more local funds and ultimately provide more food to people in need in northwest Pennsylvania. We hope people across our service area will take action and participate in the campaign.”

Last year, thanks to Walmart and Sam’s Club’s commitment to fighting hunger, Second Harvest received enough funds to provide more than 400,000 meals to our hungry neighbors.