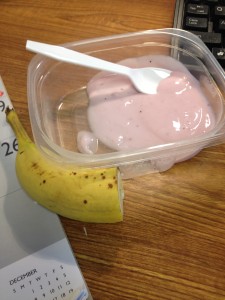 Day 3 proved to be the most difficult day so far. I woke up hungry. My stomach didn’t hurt but it was achy. I’ve never been able to eat my breakfast as soon as I wake up, so I told myself I’d eat my breakfast as usual– after I got to work.  All I thought about while getting ready for the day was my breakfast; I was excited about the 3oz of yogurt and 1/2 of a banana I would be eating. As soon as I got to work and started my computer up, I ate the yogurt and then the  1/2 of the banana. In hindsight, I probably should have waited until mid-morning to eat the banana.

My stomach started to rumble around 10-10:30 a.m., like clockwork. It was more distracting than the first 2 days. It was becoming hard to focus on my work, I’d start a task and forget mid-thought what I was doing. I kept misplacing things on my desk. It was frustrating to say the least. 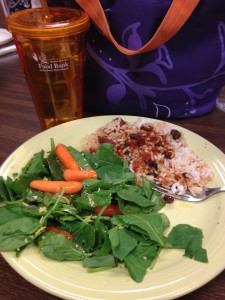 I was relieved when lunch time finally arrived. I had a spinach salad with carrots, shredded cheese and Italian dressing. I also had approximately 1/2 cup of rice with chili. I noticed that I ate this meal quicker than previous meals. I didn’t mean to, I just wasn’t thinking about it.

My afternoon was similar to my morning, I felt like my thinking process was slowed down and sluggish. Things that would take me mere minutes to do on a normal day took two or three times longer to accomplish. I left work at 4:00p with a slight headache, again, like clockwork. When I got home, I started on the tasks I had neglected the night before. I wanted to get as much done as early as possible. I mixed up and baked the cake for the staff luncheon on Friday. I used the white cake mix , gelatin and whipped topping I purchased during my shopping on Monday. The cake was easy to assemble. I learned a trick years ago that you don’t need oil or all of the eggs that are listed on the box instructions. You can skip the oil all together (which is great, because I didn’t purchase any) and you only need to use 2 eggs, not 3. You still use the water, just a smidge more than what the box says. I put the cake into the oven to bake.

While waiting for the cake to bake, my stomach was grumbling and hurting. I decided I would eat something little to hold me over until I ate dinner. I got out three 2″ pieces of celery and ate them with peanut butter. That helped a little. Once the cake was done baking, I pulled it out to cool and started on my dinner. I wanted to make a soup with the chicken bouillon cubes I purchased. I added carrots, celery, spinach and precooked rice (leftover from the other day) to my broth. It was a rather simple soup. I also fried an egg and had that on a toasted English muffin. I ate my dinner shortly after 6 p.m.

One thing that has been a challenge is my sweet tooth. I love chocolate, ice cream and desserts. Unfortunately, with such a strict budget, I didn’t want to spend my funds on such items. I had been thinking that nothing would make me happier than a spoonful of ice cream. I looked at the items I had to work with. The only somewhat sweet things I had were bananas, yogurt and peanut butter. I remembered reading somewhere that you can mash and freeze a banana to mimic ice cream. My bananas are starting to get rather ripe. I had 1/2 of one left over after breakfast and I took another banana from the bunch. I mashed them up and added approx 2 tablespoons of peanut butter. I put the dish in the freezer. Around 7:30 p.m. while working on laundry and Netflix I decided to try some of the “ice cream.” It wasn’t awful, but it sure wasn’t ice cream either. I ate about half of it and put it back in the freezer to have later on in the week.

After finishing up my laundry around 10 p.m. I decided to head toward bed. I was exhausted. It didn’t take much for me to fall asleep.

One thing I found myself considering during Day 3 was how a child would deal with the symptoms I have had: a hurting stomach, headache, the feeling of wanting to eat something specific but not having access to it. For many children, especially the younger ones, they do not have control over how their family receives food, what food is purchased with their budget, when or what they eat. They also may not understand why their parents can’t buy them everything they want from the grocery store. 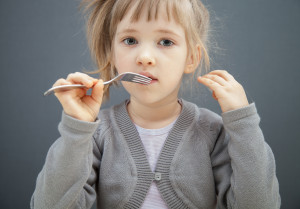 If a child goes to bed hungry and they wake up in the morning with a stomach ache, do they miss school because they feel “sick?” If they go to school with that stomach ache and they can’t focus or are distracted, wouldn’t that directly affect their learning abilities and ultimately their grades? If a child is hungry and dealing with the symptoms of hunger, couldn’t they become frustrated, angry, or even sad and removed? They are going to fall behind their peers or may even be labeled as a troublesome student. The reality of this issue, the child is not to blame. They do not have control over their situation or circumstances.

Many families in our region and across the country depend on meal assistance programs in schools to provide much needed nutrition for their children. Reduced or free breakfast and lunch programs provide students with nourishment they need to thrive in school. Programs like the childhood hunger programs provided by Second Harvest assist families when school meals may not be available. Families also rely on such programs as S.N.A.P. and food distribution efforts year round to provide meals.

In a perfect world, hunger would not exist nor would any of these programs, or food banks for that matter. However, we all know that we do not live in a perfect world and hunger affects those right in our own backyards. It is for that reason that food banks, such as Second Harvest, will continue to work hard to provide food for those in need.

For information on getting help or to learn more about the programs provided by Second Harvest, visit: www.napwafoodbank.org or call (814) 459-3663.