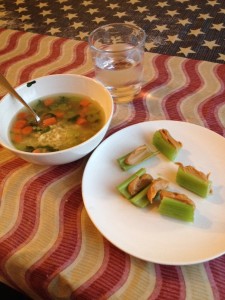 Even though it was the weekend, I still woke up somewhat early so I could keep my same meal schedule. I had 3 oz of yogurt around 8:30a.m. I watched some Netflix and got ready to head into work for a few hours. I didn’t bother taking any food with me because I knew I would be home around 1:15p.m. and would just eat my lunch then. By the time I got home, I was very hungry. My stomach was rumbling and the slight headache was kicking in.

I ended up eating lunch around 1:45p.m. which was a bit later than normal. I had a fried egg on an English muffin with a spinach salad and a few slices of cheese. I was full once I finished my meal. I had some errands I needed to run. I was gone most of the afternoon. One thing I didn’t think about was taking water with me to drink while I was out and about. I returned home around 7:00p.m. I was very thirsty and hungry. I also had a pretty strong headache by this point. Probably a result of not drinking enough throughout the afternoon as well as being hungry.

I had a hard time figuring out what I wanted to eat. Again, nothing sounded good or even remotely enticing. I settled on 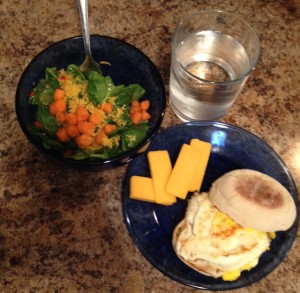 finishing up the chicken broth/rice/veggie soup and some celery with peanut butter. It was okay, but no where near satisfying. The positive side was that my headache went away.

I didn’t have much energy after running around all day, so I made sure I had a low-key evening.