Day 4 came and went rather quickly for me. I ate 3oz of yogurt around 8:10a.m., shortly after arriving to work. I learned from Thursday and decided to save the banana until I got hungry later on in the morning. That time cam around 10:45, so I ate 1/2 of a banana then. There really wasn’t much to note about the morning. I was looking forward to lunch though, the morale boosting committee was hosting a luncheon. 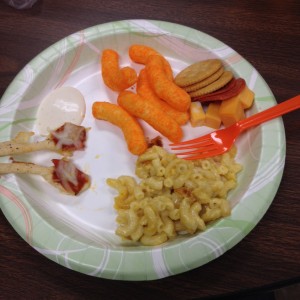 September is Hunger Action Month and orange is the designated color for the month, therefore the theme of the luncheon was orange. Staff members were asked to bring in an orange item to share. If you read Day 3’s post, you 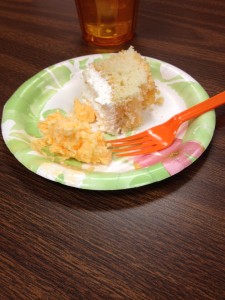 know that I made a cake using a cake mix, orange gelatin and whipped topping. The cake went over very well, I was even asked for the recipe. Once everyone was done eating, I still had about half of the cake leftover. I didn’t want to take that much cake home, so I gave most of it away. I took home 3 small pieces. The luncheon held me over until I ate my dinner. On my drive home from work, I noticed a pesky headache creeping up on me, it lingered for quite a while.

When it came time for me to make my dinner I was very hungry and also indecisive on what I wanted to eat. Nothing I had sounded good to me. I settled on cooking up one of the chicken sausage links and a bowl of the soup I made earlier in the week. Before this meal, I hadn’t eaten the chicken sausage on its own and after this meal, I won’t eat the chicken sausage on its own. I couldn’t handle the taste or the smell of the sausage. All I could think about was being a little kid, not liking what was on my plate and not being able to leave the table until I had finished everything, whether I liked it or not. I ate as much of it as I could, but I could not finish it. Luckily I ate the sausage first and then my soup so I could get rid of the taste. 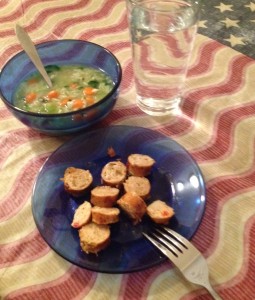 After my meal I was still hungry. I had 1/2 of a banana left from breakfast. I cut up some celery as well and ate both the celery and banana with peanut butter. It wasn’t long after that I had a stomach ache. I thought maybe it was from the chicken sausage because the smell of it was still lingering in the house or maybe it was because the banana had been from breakfast. It didn’t really matter what it was from at that point. I spent the rest of the evening with stomach pains.

Today was the day that I hit the wall—I am tired of my food options. Nothing in my very bare refrigerator or cupboards sounded good, nothing tasted that great either. I didn’t really consider getting tired of my food when I did my grocery shopping on Monday. I thought I had enough options to keep my meals varied, but rice, fried eggs and peanut butter have become rather dull staples in my diet.

Unfortunately, this becomes a reality to many folks who need assistance month after month, not just for seven days. I could not imagine trying to feed a family off of such a tight budget. It would be a real test trying to come up with meals that everyone would eat, especially children, with such limited options. Some S.N.A.P. recipients may also have access to other means to acquire food such as paychecks from employment, WIC, senior box programs, food pantries and soup kitchens, but for a lot of recipients, the monthly allotment is all they have.

I had a friend ask me about the allotment a family of 3 would receive. I went to the USDA’s S.N.A.P. eligibility guidelines and they break down the equation to calculate the S.N.A.P. allotment for an individual or family. For example, the maximum monthly net income for a qualifying family of 3 is $1650. For the purpose of this example, let’s say the family of 3 has a monthly net of $1,100. This family would automatically receive a deduction of $155 for their family size, let’s assume they have no other deductions.  So now their monthly net income is $945. S.N.A.P. says that a receiving family should spend 30% of their net income on food sources, for this family, that would round to $284 each month. You then look up the maximum allotment for a family of 3, this would be $511. To figure out the family’s monthly S.N.A.P. allotment, you subtract their 30% from the maximum allotment— $511-$284= $227, this family’s monthly S.N.A.P. allotment is $227, which is roughly $2.52 per person per day. If that is the only source this family has to spend on food items, it could be a struggle for them to stretch that allotment for an entire month.

Based off of the most recent hunger study conducted by Feeding America for Second Harvest, 85% of households served by Second Harvest programs and S.N.A.P. recipients say their S.N.A.P. benefits do not last them for an entire month. These families are then dependent on their local food pantries, soup kitchens, friends, family, and any other government assistance they may be eligible for to fill in the gaps. More often than not it is simply not enough.